So for people looking for somewhere different and a bit more off the beaten path to do for Halloween, you might want to consider visiting A Petrified Forest – Musuem of Mayhem in Altamonte Springs. The main attraction is a haunted trail, where you are literally walking through a forest with scare actors hiding along the way! There is even a real cornfield along it! Some areas feature elaborate scenes, some are just in nature. The fact that you are walking through a forest, tripping on tree limbs and rocks, feeling branches and leaves on your head and arms, all play to heighten your senses. You know you are in a real forest so instead of the typical haunted house, you feel exposed and vulnerable. Some parts of A Petrified Forest were so dark you start imagining people there! There is one scene where they use fog and lasers to create a misty lake where the actors hide underneath and jump out as if from no where, it was such an amazing effect and one I’ve not seen used before! You have one more night to go and experience A Petrified Forest this way, or for the really brave there are two special nights to go. November 1st and 2nd are known as Total Eclipse Nights! Basically on these nights, your group is given ONE glow stick per group, and the whole forest is plunged into complete darkness! They tell you that if a monster should steal your glowstick, another one will NOT be provided! I had a hard time enough seeing through this forest WITH the lights, but with no lights?! This would be the creepiest experience ever, and I’m not sure I’m brave enough to do it. Not this year anyway! If you have never been to A Petrified Forest, I urge you to try it. It was very scary and the forest element really made everything so much creepier!

They also feature laser tag, which we tried out, it was more silly and funny than anything, and not something I’d do again but it was 10 minutes of giggles and laughter! Another feature is their laser maze, where you have to dodge the lasers to collect artifacts from different rooms for prizes. We didn’t try this one as it didn’t look as fun, but people seemed to be enjoying it.

They had a live band on stage throughout the night, and food and drinks available for purchase. On the whole it was quite a fun night at A Petrified Forest, and I’m so glad we went as it’s something I had never experienced before. I am very very curious about the Total Eclipse night, the actors can even touch you then too, If anyone goes please report back, as we are not brave enough this year! You can buy your tickets online before the event, or you can pay cash only when you get there.

I don’t know about you, but I love Halloween! It is such a fun time of year with all the parties going on everywhere!

Last year was little man’s first Halloween, but at 6 months, he was more cute than anything else. We didn’t do too much more than a “costume” and some pictures. This year he’s big enough to go and have fun!

I jumped on the opportunity to take him to SeaWorld’s Halloween Spooktacular this year! Costumes, candy, dance parties and characters, what fun!! 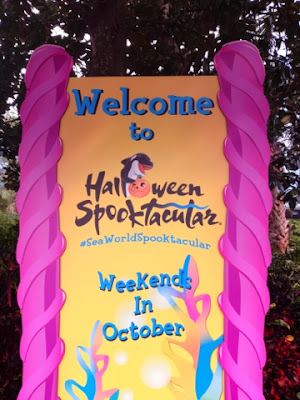 We really had a great time at SeaWorld’s Halloween Spooktacular! Overall it seemed to REALLY be geared towards the little ones, and that was perfect for us. My favorite things are that this special event is included in your regular park admission, it is during regular park hours (i.e. no late nights!) and there are lots of activities going on during Spooktacular!

Little man’s favorite things are the bubbles everywhere, the trick or treat trail (where he could hold his bag closed and try to give his candy/snacks back to people), the dance party and the characters! 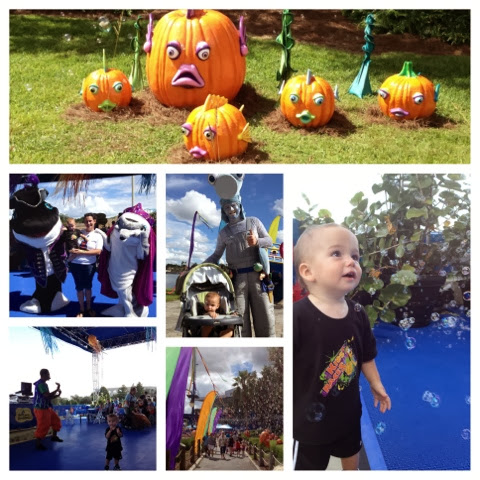 One of the things available at a small addition fee was cookie decorating. He had so much fun playing with his cookie and eating it! 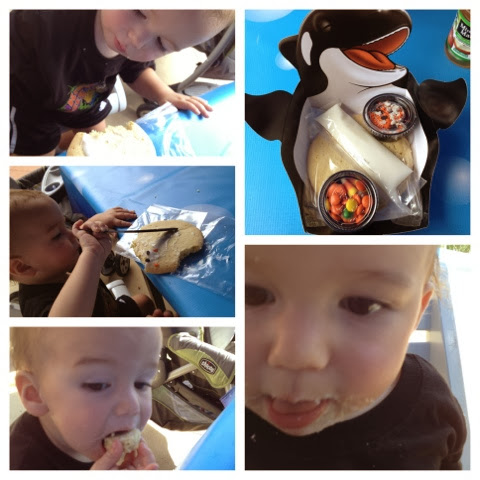 It wasn’t very crowded at all while we were there, it was quite nice! Unfortunately this event is only available a few days in the season – just weekends in October, so we were only able to go once. Next year it is definitely on our must do list! Have you been to SeaWorld’s Halloween Spooktacular?  What was your favorite part? Halloween is upon us, and for some of you, you may be wondering what there is to do at Walt Disney World since Mickey’s Not So Scary Halloween Party is sold out for tonight. You’re on vacation, or maybe you live here and aren’t going trick or treating, but you’re still looking for something fun to do. Well, you are in luck! I’m here to help you take a look at the activities at Walt Disney World. If you are dead set on still making it to MNSSHP at the Magic Kingdom, as of right now (1am on Halloween), there are still tickets available for the last Halloween party on November 1st.

At Downtown Disney, DisneyQuest Indoor Interactive Theme Park is hosting a Halloween party of its own from 6 – 11pm. In addition to regular DisneyQuest access to all the games and attractions, there will also be trick or treating, costume contests, dance parties with DJs, games and characters. Tickets are $54. plus tax for guests age 3 and up.

Blizzard Beach Water Park is even getting into the Halloween spirit with their own party from 11am – 2pm. The party is included in the regular water park admission cost. Like DisneyQuest, there will also be a dance party, character meet and greets, and there will be a chance to judge a pumpkin carving contest.

Each of the Walt Disney World Resorts will offer some sort of activity for Halloween. These include Disney movies under the stars at night with a Halloween theme like Hocus Pocus, Tower of Terror, The Adventures of Ichabod and Mr. Toad, The Nightmare Before Christmas, Halloweentown, Monsters University, Haunted Mansion, or Frankenweenie. During the day, arts and crafts and games take place at each resort in some fashion. There are a variety of afternoon and evening happenings with several of the resorts offering costume contests, trick or treating and dance parties. For more information about the specific activities for Halloween, consult the recreation calendar at your resort or call 407-W-DISNEY to get schedules.

If you get an opportunity, I highly recommend spending time at Walt Disney World for Halloween. I’ve gone trick or treating at resorts, voted on pumpkin carving contests, attended Mickey’s Not So Scary Halloween Party, and watched movies and played games under the stars. It is a lot of fun to spend Halloween at WDW and if I weren’t working tonight, that is where I’d be since it is frowned upon to go trick or treating elsewhere when you are in your mid 30s. 😉

Happy Halloween! Have a safe a fun time tonight! So it’s almost upon us, Halloween! If you haven’t already made it over to the 23rd Universal Studios Halloween Horror Nights, fear not (lol) you still have some time! There are still three more days of fear to enjoy, the last night being November 2nd. This year’s theme is zombies, with The Walking Dead being the main theme, but also featuring houses such as Resident Evil, Havoc, Cabin In The Woods, Resident Evil, Evil Dead, La Llorona, Afterlife and American Werewolf In London. Without giving too much away about Halloween Horror Nights, my favorite house this year was, by far, American Werewolf In London! I think it’s because it gave me the most scares! I literally screamed my way through this house from start to end, the effects were just so lifelike and the werewolf felt so real! The scenes were very well set up also, and I found myself pushing my way through to get away from it all! Loved it! I also really enjoyed the Cabin In The Woods house, as having seen the movie, it was really fun being able to walk through the scenes and feel like i was actually on the set, it was so elaborate! Halloween Horror Night’s scare zones this year were all the same theme, zombies. Which was quite gory but not really very scary in my opinion, as they don’t move very fast and tend to just groan or scream in your face. I miss the variety of scare zones they used to have with roller skating aliens and creepy pumpkin men! But if you are into the whole zombie theme then it is perfect for you, it feels like they are everywhere! I didn’t do the Rocky Horror Picture Show this year, but I always catch The Bill & Ted Show every year, and this year was no exception. I felt this year it had more pop culture references that I understood, so I found it very entertaining, and the music is always so fun and upbeat. Its certainly worth taking a break from the Halloween Horror Night houses to do! I actually really enjoyed being able to do some of the new rides too, as most of the large rides are open during Halloween Horror Nights and you’ll find they have decent wait times as most people are going into the houses, so many are just 10-15 minute wait times! I enjoyed eating a Krusty Burger (a vegetarian version, which was yummy!) at Moe’s and checking out the huge pink donuts on sale in Springfield! The tickets we chose this year were the Rush Of Fear passes, which gave us access to the first 3 weeks of Halloween Horror Nights. This we found was a great deal, as the first 3 weeks are much quieter as they start in September, and they include Saturdays, so we will be doing this for next year also. The Frequent Fear passes are another good option if you are planning on going multiple days, these last longer but block out most Saturday nights, which tend to be busier anyway so they are a great deal also. So what are you waiting for? Go check out Halloween Horror Nights 23 before November 2nd, but be prepared to scream, jump and run your way through the night!